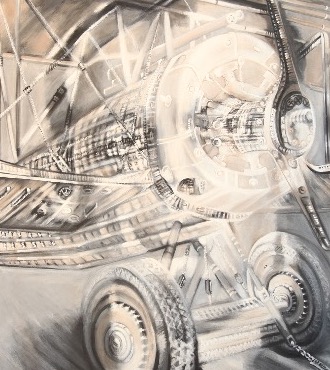 Born in 1969 in Lyon, Véronique is a french artist  first known as a muralist .
In 2011 she took a 360 degree turn after beeing a manager for several companies.
Self taught artist, Veronique loves big size walls which became her playground.in France but also in New York.
In 2013 the 5 PTZ , the highest spot for  street art in New York invited her to paint a big mural on jackson avenue; she was one of the last french painter to work there.
At the same time the Gold Coast Art Center sponsored by francis ford Coppola  in NY ordered a mural and asked Véronique to begin to work on canvas to exhibit her work there.
Back to France, working on canvas was a revelation,she quickly discovered what will become her signature: the Double Vision.
A unique in the world technic of painting of 2 images that appear succesivly when the spectator move forward or backword facing the painting.
In 2015 she was selected to represent french artist  in NY  for a special exhibition for the Obama and french president F.Hollande meeting in time square.
Since then her work travelled from the french ambassy in Washington  to chicago expressing  the point of view in painting..
Veronique received in 2017 the European Contemporary Art Prize in Paris intriguing even the museum of History and Art in Geneva with her work that nobody get to photograph...it doesn 't work..only the hidden subject will appear!
Since then swiss scientists in lausanne start researching on her brain.
Véronique Barrillot
/
Infos